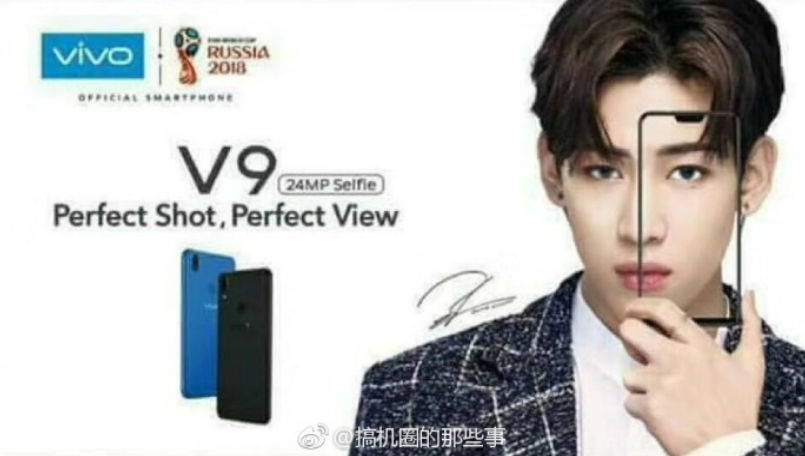 Probably notch is the next big thing. Well since the iPhone X has come every phone is adapting the notch no matter you love it or hate it. The new addition is going to be the Vivo V9 which is the successor of previously launched Vivo V7 and V7 plus. The Vivo V9 was recently spotted in the billboards in Indonesia. It also has the logo of Fifa World Cup 2018 which is going to be held in Russia.

We all know that Vivo and Oppo smartphones are selfie centric but people actually buy them no matter how much the Meme pages troll them. Vivo phones always come up with Gigantic numbers in terms of the Front Camera. The Vivo V7 plus previously featured a 24 -megapixels Front Camera and the upcoming Vivo V9 is going to feature the same in the selfie department.

Vivo has recently mad people going WOWWW by their concept phone Vivo Apex people have become more interested about this Chinese Brand in a global level. Also the introduction of under-display fingerprint was a great move in terms of innovation. However the Vivo V9 looks like the same as previous V series. From the poster it’s almost certain that it’s going to have an iPhone X like notch on the front. Also the phone is going to feature a Dual Rear Camera setup. The billboard clearly indicated about the Gigantic 24 -megapixels selfie camera. Gizmochina has also reported that the Vivo V9 will feature a rear fingerprint sensor. So we can’t expect the much hyped under-display fingerprint as of now. Also the phone is expected to be powered by Snapdragon 660 SoC. The predecessor Vivo V7 featured Snapdragon 450 SoC.