With smartphone screens getting bigger, we are facing problems to navigate apps with only one hand. Although Bezel-less displays have made the things a bit easier but still it’s always a terrible experience to use Apps with only one hand. Today Twitter has officially announced that they are changing the position of the Navigation Bar to the bottom for all Android Devices.

The possibility of this change was first reported by Android Police a couple of months ago. If you are a regular Twitter user then the bottom navbar UI will be an absolute bliss to all of you. Now you don’t have to stretch out your fingers to access your Home, Notifcations, Moments tabs. It will be very much easier to navigate through these options. Many Apps are adopting the bottom navigation UI and Twitter has also followed the same path.

We’re launching a new bottom navigation bar on Twitter for Android. With this update, you’ll be able to quickly navigate between all of your tabs with ease! 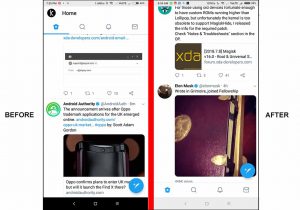 Now if you are wondering that how you can get this Bottom Navigation UI then don’t panic. You don’t even need to update this App through PlayStore. This update is a server-side update, so your user interface will be changed automatically. And by the way, you can follow us on Twitter @IndiCoder18.