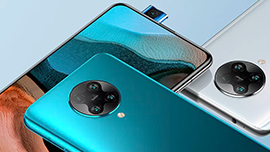 Last year, Redmi K20 and K20 Pro were launched and both of them was a massive hit for the brand. A couple of months earlier, Redmi K30 Was launched in China which was later rebranded as the Poco X2 in India. Today, the company has launched its latest flagship device, the Redmi K30 Pro in China. It has all the flagship specs which you expect from a smartphone in 2020 and the base variant starts at just 2999 Yuan (roughly Rs. 32,000).

It equips a 6.67-inch Ful lHD+ Samsung E3 AMOLED display with HDR10+ support and 60Hz refresh rate (touch sampling rate is 180Hz). It also can give a peak luminance of 1200 nit. Redmi K30 Pro is powered by Qualcomm Snapdragon 865 SoC along with Adreno 650 GPU for graphic-intensive tasks. The smartphone is also 5G enabled. It also has the Game Turbo 3.0 feature. It has LPDDR5 RAM along with UFS 3.1 storage as well.

Thankfully, Redmi K30 Pro still retains the 3.5mm headphone jack. It has a USB Type-C port and supports up to 33W fast charging. The device houses a 4,7000 mah battery and supports NFC, Wifi 6 as well.

There are two different devices and the pricing goes like this.