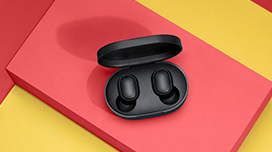 We have seen both Xiaomi and Redmi launching a bunch of products in India, so far in 2020 and after months of waiting Redmi has finally launched their TWS earbuds officially in India. These are called the Redmi Earbud S and they offer some really great specs for the price of Rs. 1,799. So let us take a look at what it has to offer.

They pretty much look identical to the popular Redmi Airdots which were immensely popular outside India. The Redmi Earbud S comes in only black color variant. The case is pretty small which can easily go into your pocket. It features a 7.2mm driver along with Realtek RTL8763BFR chip to deliver the audio.

The Redmi Earbud S is connected to your phone via Bluetooth 5.0 and also has an IPX4 rating to protect it from sweat and water splash. It has a dedicated “Low Latency Mode” which brings down the latency to 121ms to reduce the audio lag while playing games.

The earbuds have capacitive buttons control through which you can play/pause music, take/reject calls and trigger voice assistants such as Google Assistant /Siri. Redmi Earbud S has Environmental Noise Cancellation (ENC) for noise-free audio calls. The company claims the battery life to be a total of 12 hours with the charging case.

“Redmi smartphones are known to be versatile and are benchmarks of performance in their category. We approached the audio category with the same credo. With Redmi Earbuds S we want to provide a stylish and exciting true wireless experience with class leading low latency while gaming. Features like the compact design and IPX4 rating increase the versatility of Redmi Earbuds S, allowing usage across different scenarios. We hope that with the Redmi Earbuds S, our consumers have a great audio experience.”