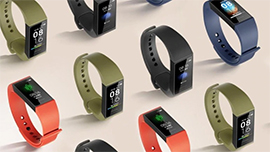 Xiaomi or Redmi is known for its large portfolio of different products. The Mi Band series is already one of the most popular in the smart wearables category. Well today, during the Mi Fan Festival 2020, a new product has been launched which is called the Redmi Band. This is a more affordable fitness band which retains almost all the necessary features. Let us look at what the Redmi Band has to offer.

The band features a 1.08-inch display in a rectangular shape. It looks very similar to the Realme Band. This approach makes it look very much different from the Mi Band 4. The band is made of TPU material and has the push locking system. It isn’t a touch display, rather, you would get a touch-capacitive button on the front. Thankfully, they have gone for a new charging system this time. You can pull off the tracker from the band and pug it to a USB-A port in order to charge it. The band also has a standard 5ATM Waterproof rating.

Redmi Band has a step counter, sleep measurement and multiple sports modes like treadmills, walking, cycling, outdoor running and more. It also retains a Heart Rate sensor. Since it’s a budget fitness tracker, it doesn’t have NFC.  Apart from that, it can give call alerts and notifications from multiple apps. Redmi claims the battery life on this band to last up to 14 days on a single charge. We will surely test that out once we get our hands on this new budget fitness band.