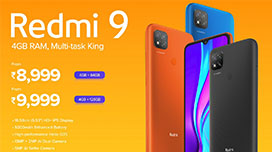 Another day another new smartphone launched, a few weeks ago Xiaomi unveiled the Redmi 9 Prime for the price of 10,000 Rupees in India. Now it’s the Redmi 9 which has been launched and it seems to be a nice phone. There are a lot of things to talk about on this phone so let’s start.

Firstly talking about the design of the phone it features the Aura Iconic Design. The rear of Redmi 9 sports a textured design that prevents fingerprints so that the device can retain its pristine look at all times. The device features a fingerprint sensor on the rear and face unlock. Now talking about the display it sports a 16.5cm (6.35) IPS HD+ display with a 20:9 aspect ratio for an immersive viewing experience. It comes in 3 colors: Sporty Orange, Sky Blue and Carbon Black.

Now talking about the Camera the phone sports a dual-camera setup. The device sports a 13MP main camera and a 2MP depth sensor coupled with an LED flash. The selfie camera is powered by a 5MP sensor.

Now talking about performance the Redmi 9 packs a MediaTek Helio G35, an octa-core chipset which is clocked up to 2.3GHz. The good thing here is that the phone will have 4GB ram and 64GB ROM.

Battery life And Other Stuffs :-

Now talking about the Battery it has a 5000mAh high capacity battery. Redmi 9 runs MIUI 12 based on Android 10 out of the box. Redmi 9 comes equipped with P2i coating to protect the phone against accidental splashes.

Redmi 9 will be available in three color variants: Carbon Black, Sporty Orange, Sky Blue across mi.com, Amazon India. The retail price is INR 8,999 for the 4GB+64GB variant and INR 9,999 for the 4GB+128GB variant.