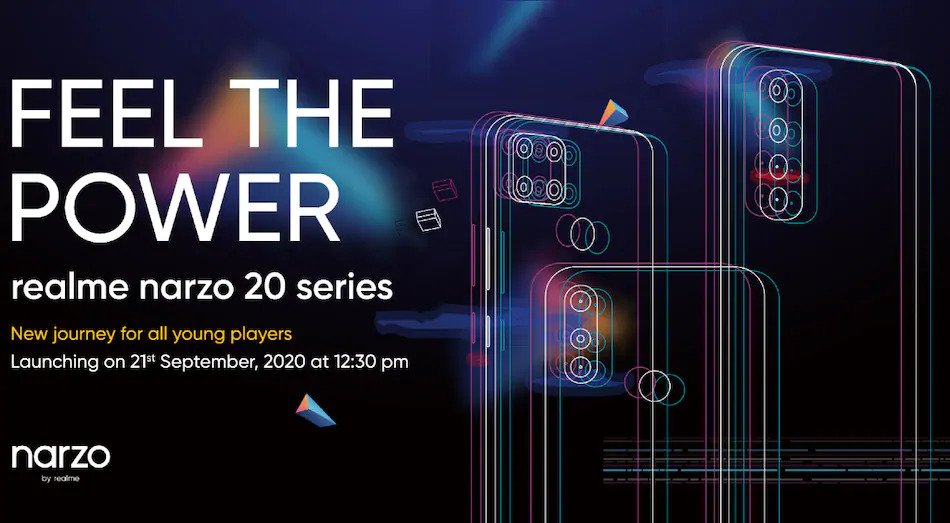 After launching the realme 7 series in India,realme has launched 3 new phones in the Narzo series and this time these phones are really amazing. The phones that are launched today are the Narzo 20A, Narzo 20 and the Narzo 20 Pro. Now let me tell all the details of this phone.

Now coming to the Narzo 20 we get a 6.5″ HD+ Display, and is powered by the Mediatek Helios G85 chip,now coming to the battery we get a 6000mAh battery with support for 18W fast charging, now to the cameras of this phone we get triple camera setup with the main camera being a 48mp camera, the other cameras are an 8mp ultra wide camera with a 2mp macro camera, in the front we get a 8mp camera. We get a fingerprint scanner and the phone runs on Realme UI based on Android 10. This phone is available in one ram and storage variant which is the 4+64gb.

Last but not the least we have the Narzo 20 Pro and this phone is really great, the phone is powered by the Mediatek Helios G95 and comes with a 6.5″ FHD+ 90hz Display, we get a 4500mAh battery and the best thing is that we get a 65W charger in the box which can charge the phone in just 38 minutes. We get a quad camera setup with a 48mp main camera, 8mp ultra wide camera, 2mp B&W and macro camera, The phone comes with a side-mounted fingerprint scanner, the phone runs on Realme UI based on Android 10 and comes in two ram Variants which are the 6+128gb and 8+128gb.