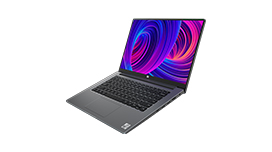 People have been asking Xiaomi to launch laptops in India for quite a sometime and the brand has finally launched their new lineup of Mi Notebooks in India. They have launched the Mi Notebook 14 and Mi Notebook 14 Horizon Edition to enter the laptop segment. The best thing is probably the pricing because it starts at just Rs. 41,999 as an inaugural price. Also, these have debuted in India and later might be available globally as well.

It comes with a metal body design made of super-light Magnesium-Aluminum alloy. It weighs only 1.35 KG and has a thickness of 17.15mm. It has a 14-inch Full HD+ display with 91% Screen To Body ratio and 178° viewing angles. The company has also provided anti-glare coating on the top of this panel.

The Mi Notebook 14 Horizon Edition’s top variant is powered by Intel’s 10th gen Core i7 processor (Core i7 10510U) along with MX350 GPU which comes with 2GB of Video RAM. It’s bundled with 8GB of DDR4 RAM which can’t be replaced. The highest variant houses a 512GB of NVMe SSD for storage purposes.

The laptop offers a 46Wh Battery and a 65W charger has been included in the box. Xiaomi claims the battery life to be around 10 hours and it should be charged from 0 to 50% in just 30 minutes. Also, a separate Mi WebCam HD has been bundled with the box.

This one is a lite version but still offers great specs. It weighs 1.5 KG and has a Screen To Body ratio of 81.2%. All the variants come with Intel’s Core i5 10th Gen processors and the top variant is paired with 512GB SATA SSD. The two base variants have Intel UHD 620 Graphics, whereas, the top variant offers MX250 GPU. All of them have the same battery capacity and come with a 65W charger bundled in the box. The webcams have also been provided with these laptops.

The laptops will be available to purchase from Mi.com, Mi Homes, Amazon.in, and offline retail partners. Buyers will also be able to avail up to INR 2000 discount with HDFC debit and credit cards valid till 16th July 2020. There is also an extended No Cost EMI option for up to 9 months. Mi NoteBook series will go on sale across platforms on 17th June 2020. After 14th July, the pricing of Mi Notebook 14 Series will be increased by Rs. 2,000 for each model (Horizon edition pricing will remain the same).