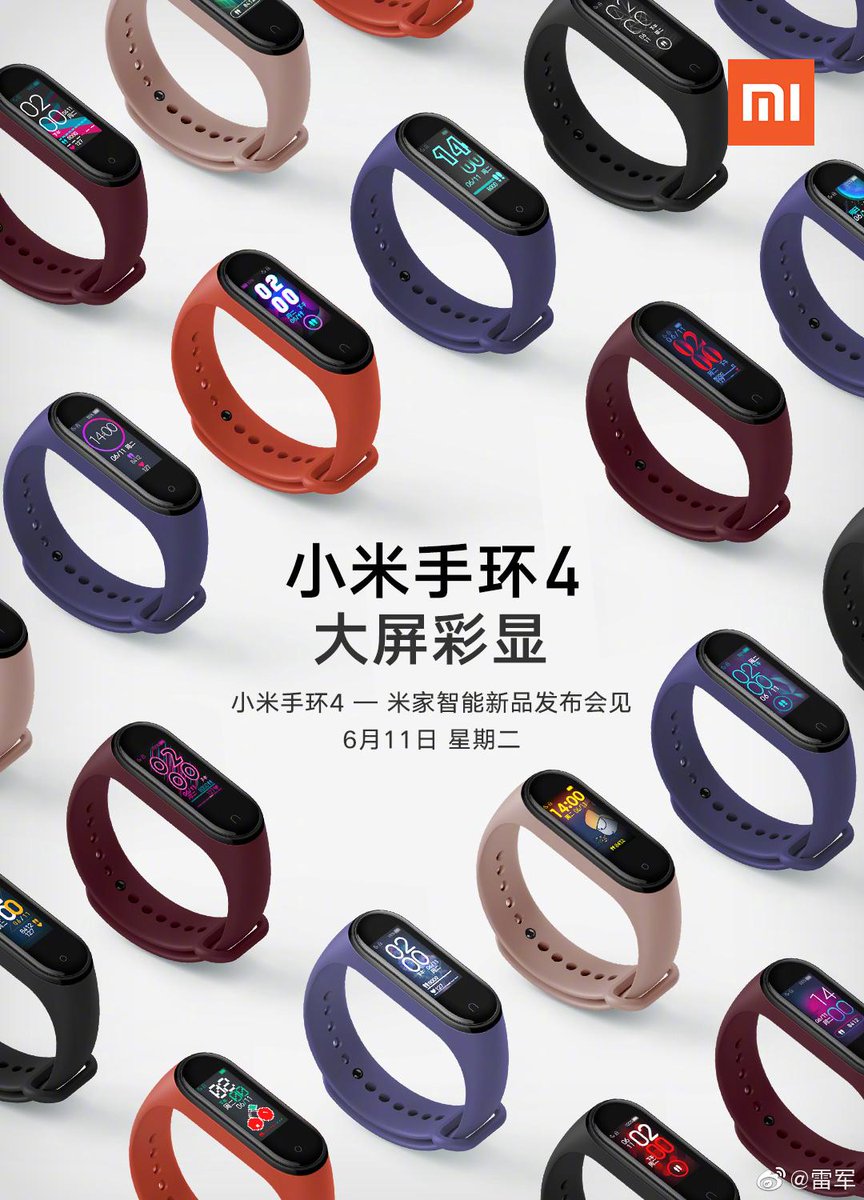 We’ve already known that the much awaited Mi Band 4 will be launching in China on 11th June. Well, today a new banner has appeared on weibo which hints more about it. Lei Jun, founder of Xiaomi has posted the banner himself. He has confirmed that the band will have a 39.9% bigger color display. It will have more than 16,000 colors. From the banner, we can see that the band will come with multiple color options for straps. We can also see a huge range of Watch-Faces. The Band 4 is expected to support customizable widgets also.

Xiaomi Mi Band 3 is the most selling fitness tracker on the planet earth and we were waiting for its successor for a long time. Well, all of our wait is going to over as Mi Band 4 is launching in China on 11th June. It was confirmed by Mijia ( a brand under Xiaomi eco-system) on Weibo that the Mi Band 4 will launch this month. Mi Band 3 sells in India for Rs. 1,999 and Xiaomi has claimed that more than a million units of it has been sold here. It’s time for its successor and it is expected to come with huge improvements.

It’s the first time that Xiaomi has partnered with Mijia for their fitness bands. We have already seen Amazfit products but partnering with Mijia is completely new. Mijia has posted a teaser on Weibo which confirms that the Mi Band 4 will launch on 11th China. The image also gives us quite a bit of hint about its specifications.

There is no doubt that Band 4 will come with a Color OLED screen this time. Finally, Xiaomi has gotten rid of the monochrome display. The display area looks relatively large as well. A couple of weeks back some pictures were leaked where it showed that the Mi Band 4 would have the customizable widgets on the screen. It is expected to come with Bluetooth 5.0 for a better connection. Band 4 is said to come with a bigger battery (most probably 110 mAh) which is indeed necessary for a display like this. The charging port will be at the bottom side.

In recent leaks, we saw two model numbers for it: XMSH08HM and XMSH07HM. It clearly means that there will be an NFC variant for the band. It will probably be used for services like AliPay which is very popular in China. The Mi Band 4 is also expected to have ECG feature this time. There is no confirmation about the pricing yet but we expect the regular variant to be priced at somewhere around $35 (Roughly Rs. 2,499).