Xiaomi’s one of the most popular smartphone in 2017 is Mi A1. It comes under Android One program and is promised to get latest Android updates till Android P. Recently it started to receive Android 8.0 Oreo beta update.

Now according to Telecomtalks it seems like the Beta Update of Android Oreo for Mi A1 has enabled Fast Charging support. Also Beta Testers have reported that app loading is now much faster and the Animations are smoother than before. So if you were conscious about buying Mi A1 for lack of fast charging then you might be happy now.

Xiaomi has previously selected very few people for Android Oreo beta testing on Mi A1. But you can still install that using some tricks. However the stable ROM hasn’t been published yet. However the Stable ROM will be soon rolled out via OTA within this week, according to sources. The basic Android Oreo features like picture -in- picture mode, smart text selection have already been enabled on the Beta Update. But the main highlight is the Enabling of Fast Charging support which was a big concern for lot of people while buying this device.

This perhaps will put it in a better position against the Honor 7x which had beaten it in speed-test comparison videos. 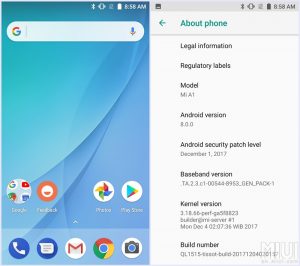 The most interesting feature this smartphone was the portrait shots capability. It is simply the best in this price segment. However the front camera performance was really not that good and we expect that with the Oreo Update that fixes soon. Recently they Xiaomi has also released a limited Red edition for Mi A1. It also recently got a permanent price cut of Rs. 1,000 which makes it priced at Rs. 13,999 .