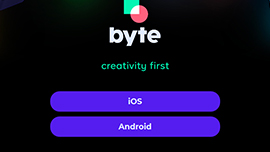 We have a new competitor on the crowded market of social media apps – well it’s not new actually. Remember Vine? It used to be a popular app to post short video clips back in the days. Later it was acquired by Twitter in 2012. But due to the rising competition from platforms like Snapchat and Instagram (crushed the stories), it was shut down in 2016. But today, Dom Hofmann, the co-creator of Vine has announced byte, a new short video platform. In this article, we are going to talk about some of the byte features and how to download byte in any country. We will also share the byte app apk link with you.

The development of byte was actually happening from the past two years and today the official announcement has suddenly taken the internet by storm again. Even “Vine” and “byte” were trending worldwide today on Twitter. Initially, the project byte was named as V2. The biggest rival for byte will be definitely TikTok.

The major difference between TikTok and byte is the time limit for uploaded clips. TikTok allows you to upload up to 1 minute of Clip whereas, byte allows a maximum of 6 seconds of the clip.

The app is officially available on both the Apple App Store and Google Play Store. However, there are some geo-restrictions and you can’t get access to it from all countries. But if you can’t wait then you can download the byte app apk from the link below.

Now, this is something that can attract more users to the platform. byte has announced that soon they will figure out a way to share revenue with the creators. Here’s what they’ve said :-

“very soon, we’ll introduce a pilot version of our partner program which we will use to pay creators. byte celebrates creativity and community, and compensating creators is one important way we can support both. stay tuned for more info.”

So what are you waiting for? We have shared the byte app apk download link above if your country is restricted as of now. Go and start uploading. Who knows, maybe they next big byte star is gonna be you? Soon you will be able to make on byte as well.