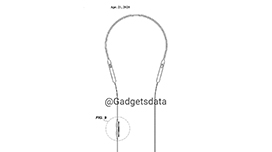 Apple Is Probably Working On A Neckband Design Earphones :-

Just a week ago Apple launched its new budget offering the iPhone SE 2020 edition with the base variant starting at $399 in the US. It already looks like it’s going to be one of the most selling Apple devices of all time. Now it looks like we might soon see a neckband design earphones from Apple.

Some new patent images have surfaced online (thanks to one of our authors Debayan) which shows that Apple might be working on a Neckband Design Earphones. This actually looks very similar to any other Neckband Earphones in the market. We can also see a physical volume controller from the images. The earbuds have a slightly angular design which might come handy to wear them comfortably.

The rest of the features haven’t been leaked yet but we expect a seamless pairing experience on this one as well as we see on the Airpods 1 and 2. They work so great with the other Apple devices which makes the overall ecosystem a comfortable place to work on. One thing for sure, if these Apple Neckband Earphones come to the market then they will be priced less than the Apple Airpods. The active noise cancellation is one of the best things on the Airpods and let’s see if these earphones retain that feature or not.